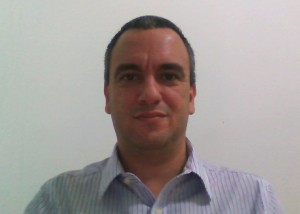 My name is Fábio Pereira and this is my new blog! I have a technical diploma in electronics (CEFET-PR), bachelor degree in law, a post-graduation certificate on electronics projects (CEFET-SC) and a post-graduation certificate om Embedded Systems Design (Conestoga). I am mostly an self-thought guy, questioning, curious, experimenter and enthusiast of several areas including microcontrollers, mobile programming, programmable logic, etc. I am currently living in Kitchener, ON, Canada, attending to the Embedded Systems Program at Conestoga College and open for new work opportunities!

My interest on electronics began very early: I got my first microcomputer (a CP400 Color II, a Brazilian version of the TRS-80 Color Computer, powered by the 6809 microprocessor) when I was about 12 years-old, I learned Basic programming language with the user manual and also by reading Brazilian programming magazines of that age: Input and Micro Sistemas. Some time later I asked my father to buy me a portuguese version of Steve Ciarcia’s “Build Your Own Z80 Computer” book.

Some years later, when I was 15, I got my first PC microcomputer, an IS-30 from Itautec (a Brazilian clone of the IBM-PC XT but using a NEC V30 microprocessor), on that machine I learned more about Basic language (Turbo Basic) and also Pascal (Turbo Pascal). At that time I wrote my very own Z-80 assembler (there was no Internet and the access to programming tools in Brazil was very very difficult). Always as an autodidact I also studied EGA/VGA video programming, 8086 assembly programming, TSR (terminate and stay resident) programming, etc.

I would like to thank my father Pedro and my grandmother Juçá. Him because he always supported me and gave me the best possible education and tools to learn and develop myself. Her because she supported and took care of me when I went to study in Curitiba at CEFET-PR (UTF-PR nowadays) when I was 14.

Here are all books I published to this date (since 2002):